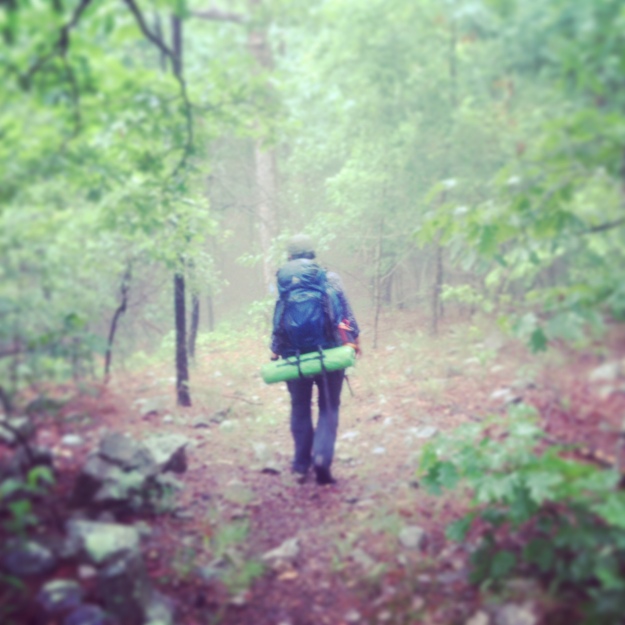 His last gift to me was a backpack.  A royal blue, 60 liter, Gregory backpacking pack. Rugged, heavy, built for the wilderness and paid for with drug money, or maybe it was stolen. He smiled while he extended the pack and I felt his glassy, bloodshot eyes trying to read my face. I hesitated, as this gift-giving stank of another tactic to delay me in throwing his ass out of the house we bought three years earlier with the blind optimism of newlyweds. A new build, as young as our marriage. I can recall the smell of the fresh plywood as we wandered through the partially framed-out structure the day we signed the purchase agreement. We were two children playing house in a half-built skeleton, wondering where the ceiling fan would hang in the living room.  If I had known what demons lurked in the shadows of the not-so-distant future I would have fallen to my knees in the construction dust and screamed.  Instead, I innocently grasped his sweaty hand with mine and contemplated ceiling fans. It was better that way, better not to know of the impending storm. It wasn’t long, after all, before the demons stepped into the light; we saw their faces and whispered their names, and began the long slog of suffering which brought us, too-thin and broken, to that moment under the whirring ceiling fan when he handed me a backpack. A bulky manufacturer’s tag swung back and forth in the circulating air and the body of the pack was slightly slumped, begging to be filled with camping gear. My toes curled on the standard-issue, builders-grey carpeting while I steadied my face, trying to suppress delight at the pack so as not to confuse the giver, for I had no delight left for him. But I smiled, I couldn’t help myself, and I took the backpack from his shaky grip. Sliding it on my thin shoulders it felt foreign, but somehow right.

How did he know I needed that backpack? He was nearly as shattered as a person can be, consumed by addiction and rocked with grief. Was he informed by whatever love for me that remained lodged in his big, broken heart? Was some higher force working through this tortured man, transforming selfishness into charity? I may never know, but this gift, this final act of generosity in our doomed marriage, was the answer to the question I had yet to articulate.  In giving me a backpack he showed me the door to my salvation , although I didn’t walk through it in earnest for many more years.  I had more suffering to do.  I had to fall further before I was ready to rise.

Oh, and I have risen!  Nature has soothed me.  Freedom has saved me. And this pack has been with me through it all, my trusted companion while I strolled through forest meadows, gazed at the sea, smelled temple incense and gulped thin mountain air. We shared the adventures he and I only dreamed of. It has traveled in trucks, planes, trains, but mostly on my sweaty back. We have been rained on, hailed on, snowed on, and baked in the desert sun. I have kicked dust on it, I have thread wildflowers through its numerous straps. I have dropped it, propped it, hung it, slugged it. It is starting to show its age, but I still adventure with it proudly.  From misery to ecstasy, we have been through a lot together.